Hi, I’m Carole and I am here to interview you for the AO Blog. I am, however, not going to ask you lots of questions about appliances, but more about you as a chef. 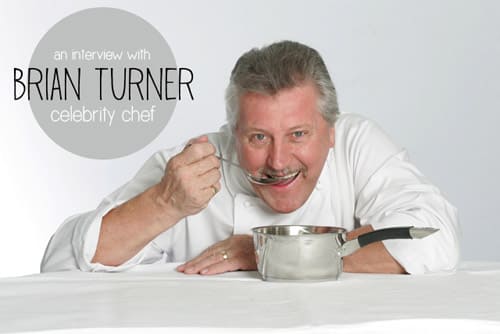 You have trained at some very prestigious restaurants; how does that go hand in hand with the grounded Yorkshire background?

That’s an interesting question. I guess it’s all about aspirations and even if you come from a humble background, there’s no reason not to have aspirations and hopefully fulfill them.

The way I like to describe it is like this: I lived in Switzerland for 18 months. I went out walking up what I thought was a mountain – it turned out to be a hill. When I got to the top, I thought “fantastic, we’ve made it” and the views were amazing. But when I looked across the valley, there was another hill which was even bigger. So the next day, we climbed up that one. And then there was another one and eventually a mountain. So, I think that no matter who you are, no matter where you start off, there’s always a way forward to go, pace yourself and try to understand it all, then you’ll achieve it.

You have really kept your down to earth ways though.

I think that’s absolutely right. There are a lot of chefs on TV these days and one or two like to believe their own publicity and I am quite lucky that I stayed the way I am. My mother wouldn’t let me get away with it.

You received a CBE in 2002, have you ever cooked for royalty?

Yes, I’ve been very fortunate. I’m President of the Academy of Culinary Art and just on Monday we received royal status and our patron is Prince Charles. I have cooked, together with my son, for the whole royal family 20 odd years ago at a wedding (they were on a special table), and I have cooked for Prince Charles on many occasions. So yes, I’m very fortunate - I’m a great royalist and I believe they do a lot for the British hospitality business. 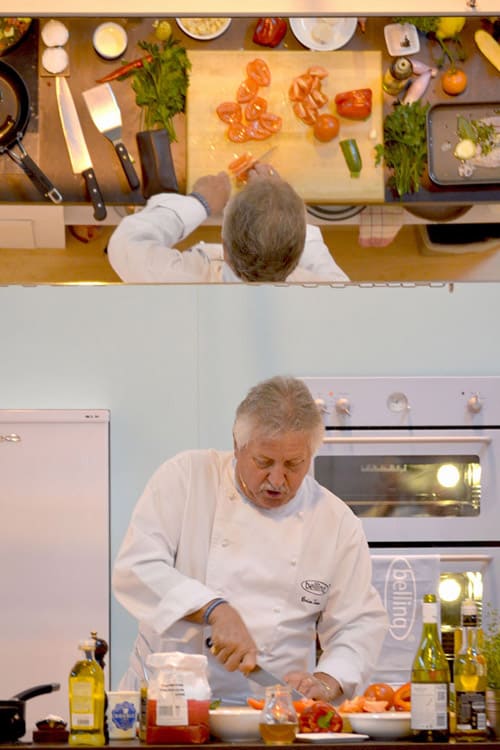 Do you still get nervous cooking for royalty or other people?

I get very nervous cooking for Phil (Laughs! Phil is at that moment sitting next to us, eating what Brian had cooked on stage earlier. He is the AO account manager for Belling) . I think it’s good to have a sensible apprehension. Once I know what’s going on and I know what I’m doing, I’m fine. Yes, you want things to work, yes, you’re nervous, but you can only do what you can do. Yes I still get nervous going on tv, I get nervous going on stage for live cooking shows, I get nervous cooking for lots of people, but it’s one of those things that dissipates itself once you start to get into it. 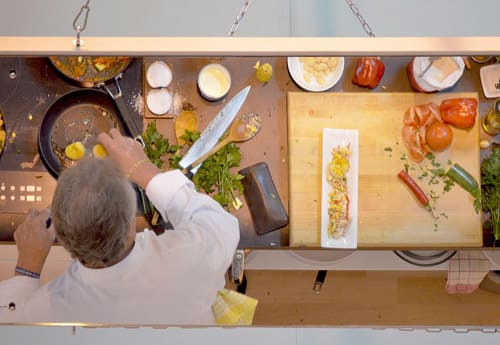 Delia Smith criticized Masterchef, claiming it intimidates and puts people off cooking. What is your view on that?

I think that Delia has done a great job for the British cooking thinking, and she has a right to her view. I don’t think she’s wrong, I think many things she says are perfectly correct. I think that TV is actually not there to promote cooking, it’s there to produce entertainment shows. The responsibility lies with the people who are being asked to do shows to turn them down if they’re not appropriate. I have had various offers which I have turned down because they don’t reflect my ethos. So Delia’s not wrong, but sometimes it’s simply about the excitement factor and getting the figures in and not about teaching people to cook.

My friends of course. Michel Roux, Michel Roux Jnr., Rick Stein, James Martin. There are lots of people who do a good job. I think we have to be careful that we’re not known as a tv chef, but as a chef/restaurateur. There are some great people who present well and then there are some who maybe shouldn’t be on tv.

You’re an ambassador for Stoves and Belling, cooker aside, what is the one appliance you couldn’t live without?

Chefs have a philosophy: there’s nothing you can’t live without, though there are things you dearly wouldn’t want to live without. I have a chopping board which is 3 inches thick and very heavy. Whenever I can, I bring this chopping board. I can chop on it, present on it, it can be on camera, and it means it’s my focal point.

Apart from British food, what is your favourite cuisine?

One's favourite often changes with the seasons or who you’re going to dine with. I love good Indian food and there’s great Indian food in the UK today. I love Sushi and Sashimi and various bits of Japanese cooking. So, it really is between Indian and Italian.

Do you eat horsemeat?

I do eat horsemeat. I don’t go out looking for it, but I wouldn’t reject it. I think the whole horsemeat argument had nothing to do with horsemeat, it had to do with public accountability and people buying what they think they’re buying.

What’s the best way to cook a globe artichoke?

It depends on the age. On a very young one, trim off the stalk, slice very thinly (possibly with a mandolin), panfry it with a little butter and olive oil, salt and pepper, garlic and chopped parsley and a squeeze of lemon juice for flavour.

If you have a big one, take the stalk off, pull the whiskers out, trim it and cook it in boiling, salted water with a bit of oil and lemon juice, and when it comes out (the pan) put it into oil so it stays the right colour.

I believe I have found the best pork pies at Hunters in Helmsley in North Yorkshire. Do you have any better tips?

Every month, at a place called The Old Bridge Inn, the Pork Pie Appreciation Society meets to taste pork pies and every year they have a pork pie competition. I go to judge the pies when they get down to the final twelve. There are some great winners in that completion. I personally like a company called Wilsons in Crossgate and their hot pork pies are the best I’ve ever had.

I’m an advocate of Bubble and Squeak like my father used to do with sliced potatoes and onions. I love cheese on toast, but if it’s an outside comfort food, you can’t beat Yorkshire fish and chips.

Who cooks in your home?

I don’t get home very often, but when I am at home, we go and see the grandchildren, so by the time we do get home it’s usually takeaway Indian or pizza. Take the shoes off, and relax on a Sunday night.

What are the staples for a perfect summer picnic?

Pork pies, absolutely. I always have pork pies and piccalilli or Branston pickles. Make your own sausage rolls and I love a cheese version of a quiche Lorraine. Nowadays some barbeque food would go well like burgers or koftas. As long as you have a bottle of iced champagne, it will always be a great picnic.

When I make shepherd’s pie, I put my own French twist on it. Is it ever ok to change national dishes?

Everything evolves and I believe that the addition of new ingredients is only right if you compare what you’ve done to the traditional way and can say “this is better” and if it’s not, then don’t change it. Basically, don’t change it unless it really is better. I like to put swede and carrots on top of mine, but at the end of the day, is it better because it’s a variant rather than a new version?

Could you ever be a vegetarian?

No. I tried it once and by afternoon tea I was back on, and I was fine.

You have collaborated on a beer, any plans for a wine?

No, I’m not the world’s biggest beer drinker, I like champagne and wine, but my father was a great beer drinker, so I was thinking more of him than anything else. It has taken British wine makers a long time and education to get to where they are today and I don’t have those skills.

One final question: How do you cope with all the female attention?

It could be worse, it could be all male attention! What can you say, c’est la vie, as you say in France.

Thank you so much for talking to me, it was an absolute pleasure to meet you! 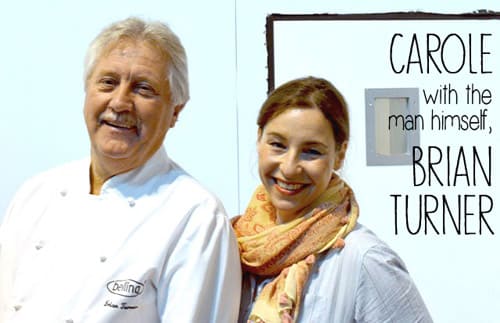 Carole attended the BBC Good Food Show and was introduced to Brian as a guest of our friends at www.belling.co.uk.

Brian Turner will also appeared on the Belling stand at the Winter BBC Good Food Show 2013.