Ahead of the much-anticipated FIFA World Cup taking over our TV screens this winter, we’ve worked with LG  to reveal just how much the UK loves its football – above and beyond simply watching the matches on our TV screens.

Together we’ve uncovered how Brits’ lives are dedicated to the beautiful game and how integral our home entertainment systems are to our enjoyment, just in time for football fever to grip the country once again. Did someone say, ‘it’s coming home’?

On average, Brits dedicate almost 48 days per year to football

Britain’s love of football is a long story, and whilst it’s unsurprising that watching games live on TV is the most popular way we tune in, we’re clocking up a huge volume of hours interacting with the sport through a wide variety of content, mediums, and experiences, too.

In fact, the average Brit is spending 21 hours and 48 minutes on football per week, which works out at almost 48 days per year. That’s right, 13% of our entire year is spent worshipping at the altar of football.

These numbers only get bigger when we look at just the male perspective, clocking up an average of 25 hours and 31 minutes per week or 55 days per year.

With 16 hours and 23 minutes per week spent enjoying football in some form or another, this equates to women spending 35 and a half days per year on their passion for the sport. 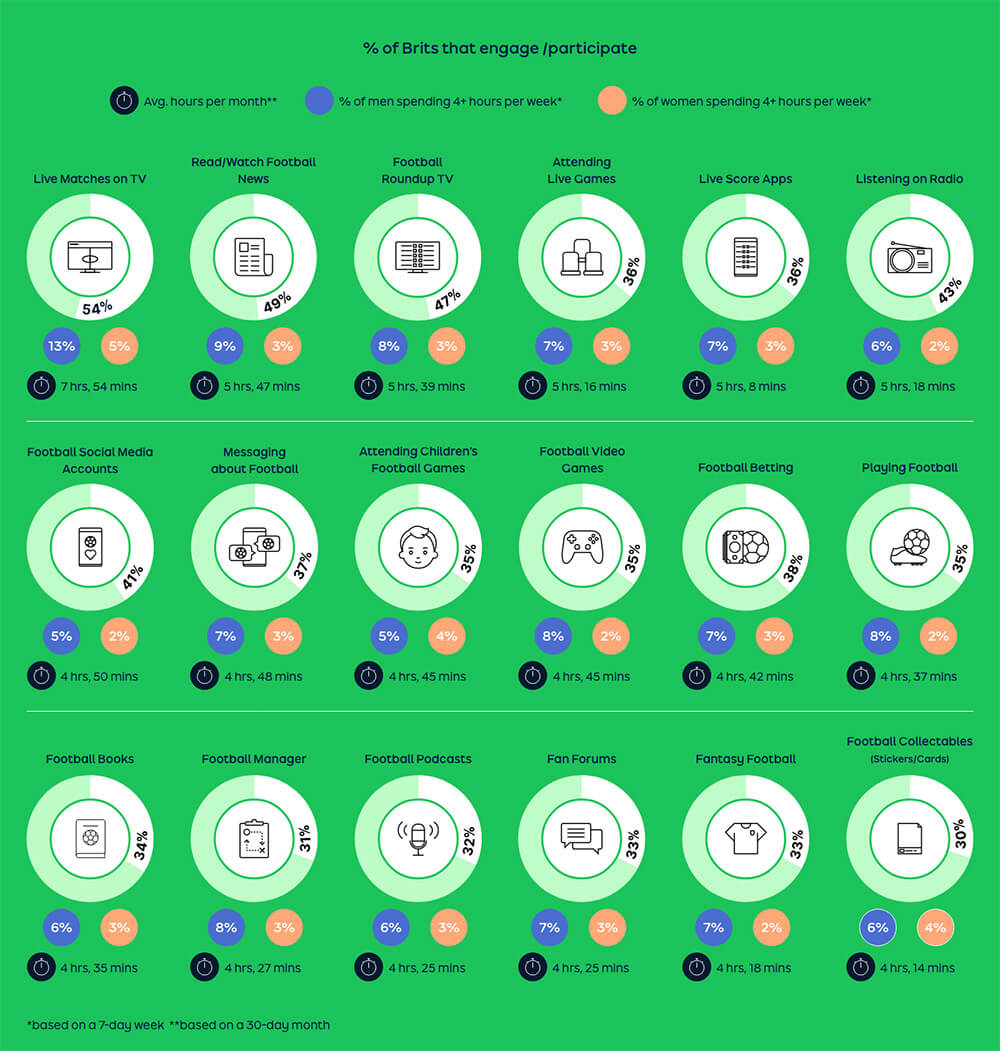 Given that three out of the top five football formats that Brits dedicate the most time to are TV-based, it’s no real surprise that our favourite way to watch our team play isn’t at the stadium, but from the comfort of our own homes on our TVs.

This is the preferred way to watch for almost a third of us, with live in the stands taking second place, followed by viewing in a pub or sports bar.

So, it turns out that we’re a nation of proud armchair supporters, spending more time watching football games and programming on TV than being there in person cheering our team on, but this approach comes with its own set of problems. Almost a third of us (29%) admit that arguments break out in our household over who gets to use the best TV in the house to watch the footie on.

These arguments could have something to do with the volume in which we’re watching football on TV, as these top three football formats also happen to have the highest volume of men spending more than 4+ hours a week enjoying them.

Football consumption versus quality time with friends and partners

Now we know the extent to which Brits invest time into relationships with football, we’ve compared it to the hours dedicated to romantic relationships, whether time spent dating or spending quality time with a partner – and it’s clear where true love lies for both genders.

On average, Brits are spending just 2 hours and 56 minutes per week nurturing romantic connections, working out at 12 hours and 34 minutes per month and just over 6 days per year – more than 8 times less than the time we invest into football related content and activities.

Whilst men dedicate slightly more time than women to their love life, clocking up 13 hours and 19 minutes per month on average, versus women who only spend 11 hours and 34 minutes per month, the hours don’t come close to those spent on the beautiful game.

It’s not just romance that’s taking a backseat to Brits’ obsession with the sport. When it comes to spending quality time with friends outside of football related activities, we only dedicate an average of 2 hours and 24 minutes per week to make dates and catch-ups.

This works out at just 11 hours and 29 minutes on average per month or just short of 6 days a year, coming in at almost eight times less than what we spend enjoying football; a clear indicator of which relationship has our most full and undivided attention.

In fact, for men specifically, it’s been revealed that they spend on average more than 10 times the amount of time enjoying football than they do hanging out with their mates.

60% of Brits are enjoying football during working hours

Three fifths of Brits have owned up to letting their passion for football overlap with their working hours, giving a new definition to ‘hybrid working’. However, this could be as innocent as having a football podcast on whilst working or a friendly colleague football game over lunch hours.

Yet again, men lead the charge as the figures rise to 67% versus only 49% of women who engage with football content daily whilst at work.

The battle of the sexes has been equalised on one front, though, with 8% of both men and women admitting to spending between four and five hours watching, listening, reading, or even playing football throughout the workday. Most Brits only admit to between one and two hours per day.

The newest generations into the workforce are the most determined when it comes to incorporating football into their workday, as a huge 78% of 16-24-year-olds admit they enjoy football in some format or another during working hours, with 16% engaging with four to five hours’ worth per day.

There are some necessary occasions where Brits have prioritised football over work, as nearly two thirds of us (61%) have used some of our annual leave allowance or flexible working perks for the greater good of watching the football.

68% of men and 42% of women have taken annual leave to watch football, rising to 82% of 16-24-year-olds and 73% of 25-34-year-olds whilst those living in Norwich, Nottingham, Sheffield, and Birmingham are the most likely to prioritise annual leave for football related necessities.

The most football fanatical professions

We’ve also been able to identify the professions that have the most dedication to the sport based on their average consumption hours coming in well above the UK average – and we mean WELL ABOVE.

If you work in one of the below industries, chances are you’ve well and truly got football fever and can boast super fan status.

The industries that attract those who are the least enamoured with football still dedicate a sizeable chunk of time engaging with the sport:

The cities that are home to the most dedicated football fans

Whilst every football team’s fans like to think of themselves as being the most diehard of supporters, there are certain regions of the UK who are putting their money where their mouth is, or more appropriately, are clocking up the hours to back up their claims.

And the top five results aren’t what you might think. Manchester and Liverpool who? 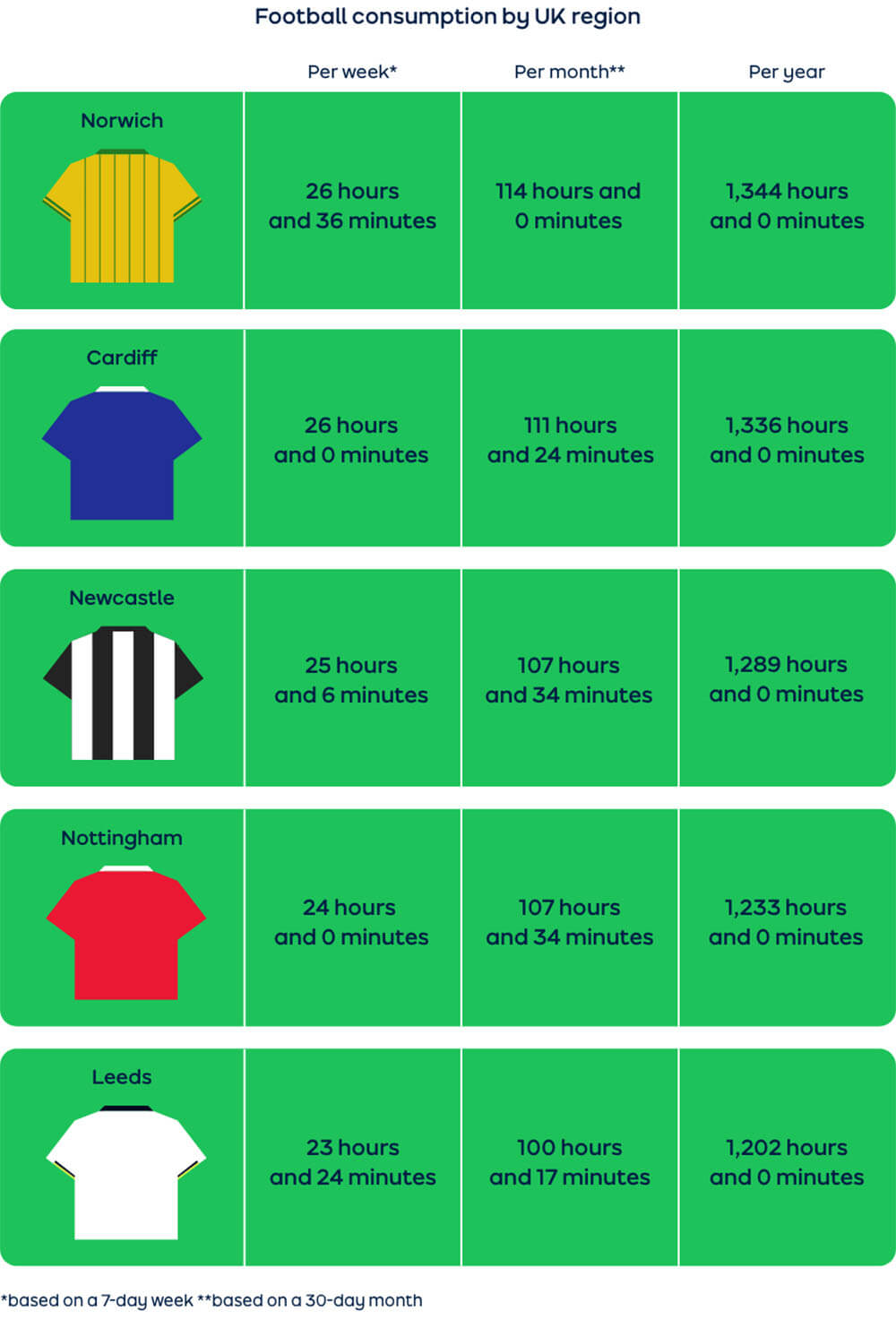 For the first time ever, the FIFA World Cup will be hosted in the Middle East and will take place in the winter months of November and December, giving us all a much-needed distraction from the minimal daylight and colder weather.

We’ve already established that we’re a nation who aren’t afraid to take football related leave and it seems some of us have been saving it up as a third have booked days off to coincide with the World Cup matches being aired on TV.

One in 10 Brits will take three days of leave over the course of the 4-week-tournament and more than double the number of men (49%) than women (19%) will have World Cup specific time off.

There is no limit to Brits’ ability to plan ahead when it comes to major international football tournaments as over a quarter (28%) of us have already laid claim to the biggest and best TV in the house, whilst 9% of households are having to implement a TV rota during the World Cup to ensure fair access.

This future planning extends to our home entertainment set-ups as almost a quarter (24%) of Brits are planning on purchasing a new bigger/better smart TV in time for the World Cup with 6% of those confessing that it’s their sole motivation to have a better football viewing experience. Another 6% are debating making a new TV purchase in time for kick-off on the 20 November.

TV credentials are crucial when it comes to where we’re prepared to watch the World Cup as almost a third (30%) of us have already got plans in place to head to friends or family’s houses and it turns out, size (and resolution) really do matter.

Reasons Brits are going elsewhere to watch the World Cup

In fact, when questioned about what size screen is needed to truly be able to enjoy the football, 32% of Brits admitted that they would abandon their plans to watch the World Cup in a pub or sports bar if they didn’t think the screen was big enough, increasing to 44% of men versus only 21% of women.

The younger and more technology savvy generations take their TV size the most seriously, as half of all those aged 16-34 would walk right out of the pub if they deemed the screen size to be too small.

So, the age-old question of whether size matters has well and truly been answered by football fanatical Brits.

The Best LG TVs for the optimum World Cup experience

Here’s our roundup of the best LG smart TVs, LG LED TVs, and LG OLED TVs that will see you through World Cup season and beyond, making sure you get maximum at-home enjoyment from your football viewing experience – come rain or shine and win or lose.

You can also head to our prize-draw page and sign-up to the AO newsletter to be in with a chance of winning a 65” 4K Ultra LG OLED TV and home entertainment setup worth more than £3,600, which will be delivered in time for the World Cup, making you not only the envy of all the football fans in your life but will probably land you with World Cup screening duties.