Last Friday I was fortunate enough to attend a Chinese cooking lesson at the School of Wok in London. The head chef and founder, Jeremy Pang was our tutor for this course and not only hugely knowledgeable (having trained at Le Cordon Bleu) but also very charming and fun. We found out that anything can be "made to taste Chinese" by adding soy sauce, sesame oil and a little sugar. We also learned that garlic, ginger and spring onions are the basis for nearly all meals and that Chinese food consists of 90% preparation and 10% cooking. Pretty interesting, don't you think? Anyway, the first dish we prepared was Dim Sum. This name actually refers to a variety of small, bite sized portions of food which are traditionally served in small steamer baskets. The ones we made were small pastry parcels filled with meat and vegetables which were then steamed and were called (and I really hope I remembered this correctly) Wonton. There is an interesting technique to folding them correctly and it was rather nice to find out that the small pasty sheets can be bought ready-made from a Chinese supermarket as making them would take a long time due to the fact that each sheet needs to be rolled out individually... 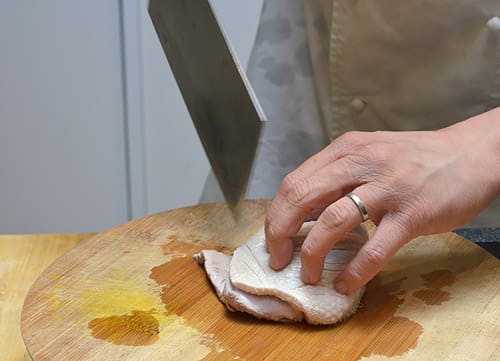 After we finished making the Wontons, we relocated into the actual kitchen were Jeremy showed us how to cook the perfectly crispy duck breast. I will now let you into the secret of how to get your duck breast really crispy: it needs blanching for a few minutes before seasoning. This will make the meat contract and wash out any impurities. After that, dry the breasts off with some kitchen roll, score the fat with a sharp knife and rub in some salt. 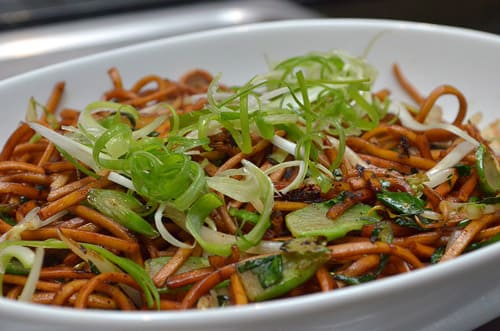 We were also shown how to handle a wok the correct way when Jeremy demonstrated how to cook a simple but very tasty stir fry with noodles. After that, it was our turn to see if we could master the art of the "wok toss". Much laughter and worried looks later ("don't lose your sizzle"), we dished everything up and made our way back to the front of the school where we all sat down to enjoy our creations along with a glass of wine. We chatted, ate, giggled about slowly developing something of a claw hand due to the unfamiliar use of chopsticks and all felt like we had really learned something new during this short course. I can really only recommend this if you like Chinese and Asian cuisine. It was fun and informative and the food was delicious. I mean, what more could you possibly ask for, right?