When Karen Knox and her husband moved into their 3-bed post-war semi-detached home, they knew there going to be a few compromises. The interior designer and blogger at Making Spaces was in her third trimester of pregnancy at the time and while the house was ideal in many aspects, the kitchen left much to be desired. 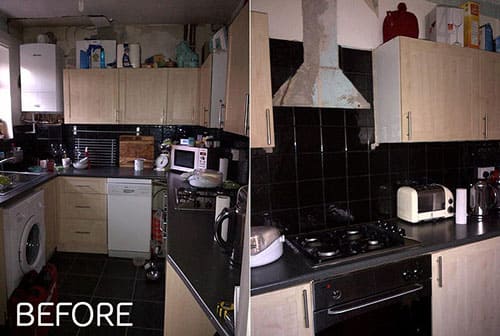 The black tiles, floors and worktop sucked any light out of the room. The kitchen units were cheap, the cooker hood didn’t work and the lowered false ceiling not only made the room feel smaller, it was made of UPVC which hid a botched electric lighting job. The boiler was broken, there was a maze of pipes running all over the walls and the wood had been neglected. “We referred to it as the hovel,” Karen says. “I officially hated it.”

But with a baby on the way and work on the bathroom (which was in worse shape) prioritised, it was clear that Karen’s dreams of a light bright space would have to be put on hold for a little while. As her son reached his first birthday and itching to get started, they began to rip out the kitchen little by little as and when time allowed. 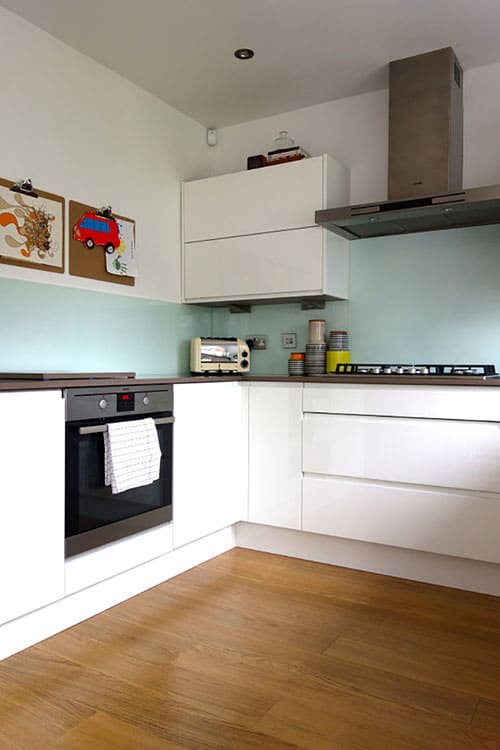 “I remember my other half saying ‘I’m just off to make a cup of tea…’ Two minutes later, half of the ceiling was on the floor. I was so pleased. The whole process was very cathartic.”

Fourteen months after moving in, the dream started to become a reality. Her plans were firmly decided long before the work took place and so they transformed the layout by removing a wall to open to the dining area, creating a small utility room and installed a much-needed window looking over the garden. 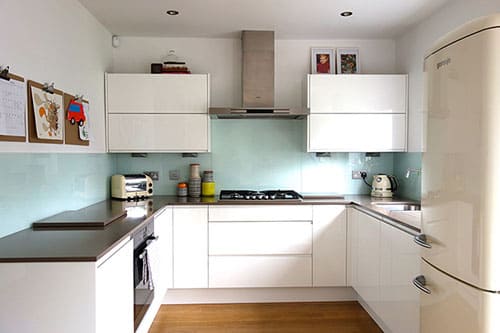 Karen remembers, “We acted out all of the functions – making a brew, a sandwich, loading the dishwasher – even before we first fixed any plumbing or electrics so we knew exactly where we wanted the sink, sockets for the kettle and how the prep space related to the fridge.” She was clever with storage too. “We knew we didn’t want the microwave out on the worktop and didn’t have space in our wall units to integrate one so we added a double socket inside a base cabinet to house it instead.” 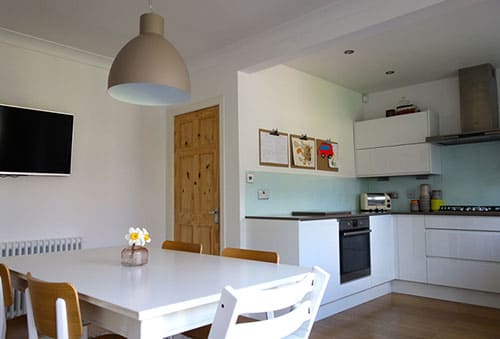 Opening the kitchen to the dining room meant the open storage would also be put to good use “We utilised the shelving in the dining area to house things like wine glasses, spirit bottles, cookbooks and our coffee maker.” Using the space as one connected each area fluidly and made use of the entire open plan. 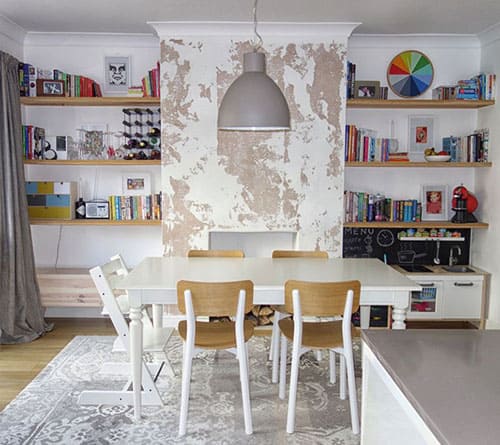 As much as they would have liked to extend, they made the most of the space they had, including fully built in appliances from AEG and a Gorenje Retro fridge freezer. “The built-in appliances take up less room and allow us a continuous run of the worktop. It made the space look more cohesive. I think appliances should blend seamlessly into the background and they can really enhance a space if you select the right look to compliment your cabinets.”

As for the design, Karen opted for white gloss handleless units to make the most of the north-east facing room. The look is unfussy and clean, perfect for a smaller space.

Saving money on the units, Karen says, “We spent a little extra on the worktop and opted for quartz in a warm, stone colour. I’m so glad we did as it just lifts the space and it’s wearing really well too.”

As for her favourite aspect of her new kitchen, Karen says, “I think my favourite thing about the whole space is the fact it feels like it was always meant to be like this. Moving the window to overlook the garden as opposed to having it overlook our drab driveway made a massive difference. That and opening up the whole space into what was the dining room has given us a fab family cooking/eating/ hanging out space. We definitely spend more time in this room than we do our living room.”

All images copyright Karen Knox and used with kind permission.