For many of us, the hallway tends to be simply a throughway into the rest of our home. We enter and exit the space quickly, never really considering what impact it may have either on ourselves or our visitors. With it being such a high-traffic area, why not ensure it sets the tone to match the feel of the rest of your house?

This is exactly what interior lifestyle blogger, Olivia from Lust Living did in her 3 bedroom semi-detached home which she shares with her husband, Matt and her two dogs, Bean and Alfie.

Olivia explains, “It was the only part of the house that we hadn’t touched; despite it being the first thing you see when you walk in. It was dull and boring – with the ugliest carpet you’ve ever seen up the stairs! None of it was my style and I was determined to brighten the space but at the same time put my own stamp on it.”

For those familiar with Olivia’s blog and Instagram, it’s clear her style isn’t dull or boring. A mix of Scandinavian minimalism with an eclectic feminine touch of gold, blush pink and plenty of her favourite pattern – dalmatian print! 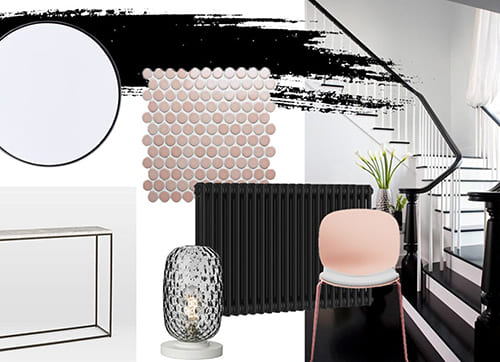 After taking to Pinterest to search for monochrome hallway ideas, Oliva and her husband took on the work themselves to transform a once tired hallway into a welcoming and bright space with a cheeky welcome created in the tiles as well as plenty of style and personality.

“It was a DIY job between my husband and myself. We try to do absolutely everything ourselves to save money unless it’s for something specialised and in that case, we would get tradespeople in."

"The makeover involved tiling, painting, pipework for the new radiators to be installed and a lot of sanding the stairs!” 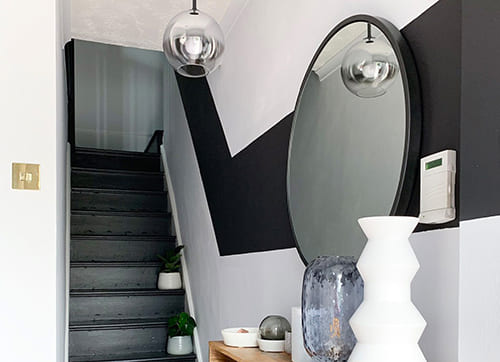 Of course, with most DIY jobs, it’s not always smooth sailing and Olivia’s biggest challenge was one that she thought would be rather simple – painting the feature stripe on the wall up the stairs.

“Let’s just say frog tape is not my friend! In the end, I had to just bit the bullet and had to touch up the whole length of the stripe by hand with a paintbrush to fix up where the black paint had bled through the tape.” 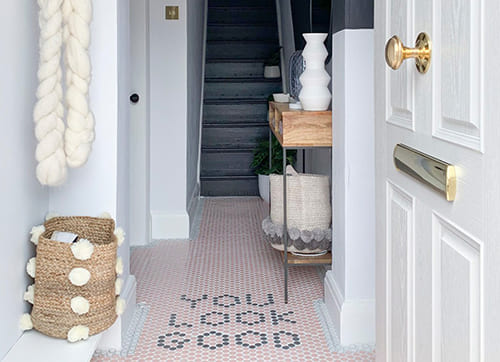 The first and most noticeable element of the space is the message “YOU LOOK GOOD” which has been spelt out in tiles on the floor.

“I was so desperate to have a cheeky focal point as soon as you walk in the front door,” explains Olivia.

“I had to figure out what we actually had room to spell given the width of the hallway is quite narrow, then it was just a case of laying them out time and time again until it was clearly readable before setting them with adhesive.” 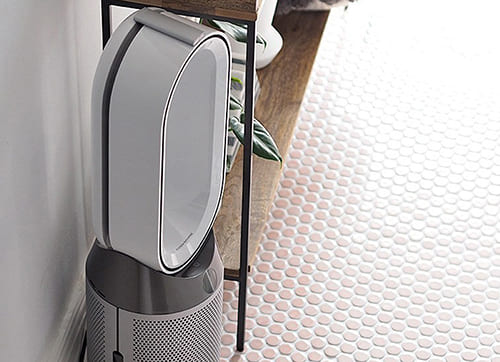 Olivia made good use of her Dyson hot cool fan in her makeover which she chose from AO.

“It made painting a space with no windows much more bearable and reduced the fumes!  It’s been a Godsend throughout summer too!”

The final result is clear to see – a welcoming fun space which works beautifully along with the rest of her home.

“I still walk in the front door and can’t believe it’s the same hallway! It feels like the last puzzle piece to the whole house makeover. My favourite part is definitely the penny tiles where we spelt ‘YOU LOOK GOOD’ in the floor!”

As this makeover was done in four short weeks for the Revamp Restyle Reveal Challenge, we asked Olivia what her top three pieces of advice would be for someone looking to update a space in a short time period.

“If you’re on a time scale, ask for help! Two hands are always better than one!”

Tip 2: Start with the walls

“Walls are a good place to start and re-painting is going to change the look drastically, quickly!”

Tip 3: Command strips are your friend

“Command strips are great for quickly creating a gallery wall without the need for a hammer, nails or holes in your wall!”

Now that this space is complete, what’s next for Olivia?

“Our next project is an outdoors task – our front garden that we are converting to a full driveway, and then after that, we will start the huge task of converting our garage! It never stops!”